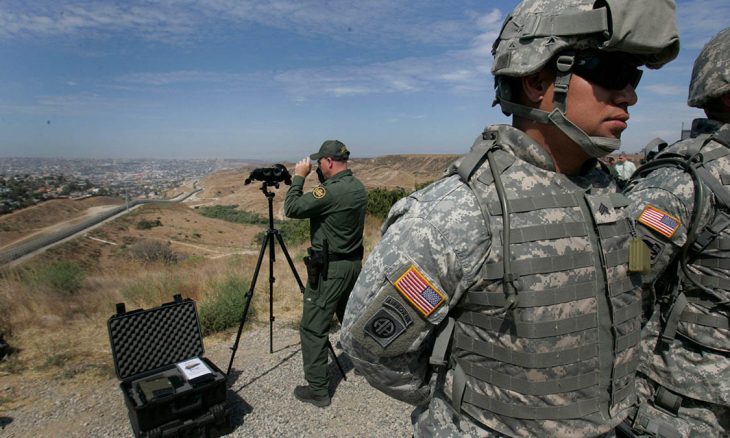 The military announced this week that soldiers on the Mexican border would be redeployed in the coming days and would all be home by Christmas. Lt. Gen. Jeffrey Buchanan, who is heading the operation, said that active duty combat soldiers, engineers, and logistics crews were at excess capacity along the border.

Late Tuesday, the military backtracked its statements, with an army spokesman telling news media that there is now “no specific timeline for redeployment”, and that the military would provide “more details as they become available.”

There are currently 5,800 troops, engineers, and support staff stationed along the southern border. Up to 1,100 of these are armed combat troops.

The change in strategy was likely triggered by the news that more than 3,000 migrants had poured into Tijuana, right next to the California port of entry. It is estimated that this number could swell to 10,000 as more caravans link up and join the migrants.

U.S. Army North Command said in a statement that “We are continually assessing our resources and refining requirements in close coordination with the Department of Homeland Security. We may shift some forces to other areas of the border to engineering support missions in California and other areas.”

In addition to providing combat troops to support border control agents, the army has been erecting fortifications along the border.

The army advised this week that the port of entry in Southern California could be closed if there were any attempts by migrants to storm the border.

Trump sees the migrant caravan as a threat to U.S. security and financial interests. The President signed a proclamation on November 9 that would block migrants from seeking asylum if they illegally cross the border. Under current law, asylum seekers may apply for processing even if they do not pass through an official port of entry.

The proclamation has now been halted by Federal Judge Jon Tigar in San Francisco. In a ruling that suspends the proclamation until a December 19 hearing, the Federal Judge said that “Whatever the scope of the President’s authority, he may not rewrite the immigration laws to impose a condition that Congress has expressly forbidden. Asylum seekers will be put at increased risk of violence and other harms at the border, and many will be deprived of meritorious asylum claims.”

The White House will need to fight in court to have their asylum restrictions enforced, but the big question remains… Are current immigration laws fairly serving the citizens and national interests, or do they need to be completely revised so that the migrant crisis can be solved?