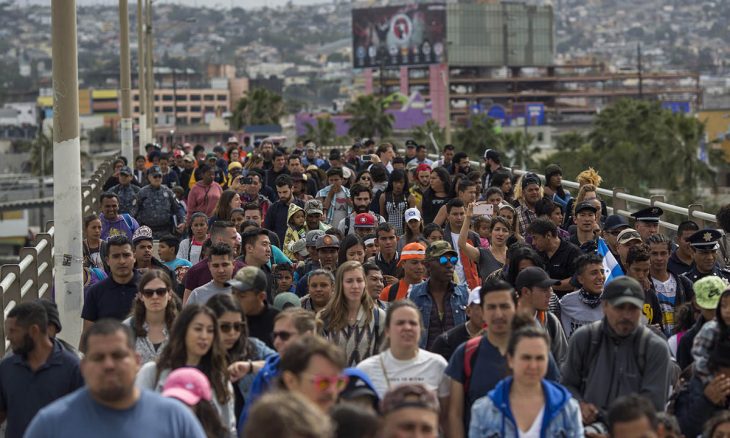 The Washington Post and several other major news outlets have reported that the White House is considering executive action to prevent a Honduran immigration caravan from crossing into the United States. The migrants, who will claim asylum if they reach the southern U.S. border, have sparked a major political debate and some strong words from the President.

On Thursday, Trump posted a Tweet saying “To those in the Caravan, turnaround, we are not letting people into the United States illegally. Go back to your Country and if you want, apply for citizenship like millions of others are doing!”

President Trump is Standing His Ground on Immigration

In Tweets last week, the President threatened to dispatch the military to protect the border if the caravan is allowed to reach the United States.

The migrant caravan reportedly contains thousands of potential asylum seekers, fleeing poverty, violence, and crime in Guatemala and Honduras. The total number was once thought to be at least 4,000 but may be closer to 1,000 as of today.

The San Francisco Chronicle reported that President Trump was prepared to sign a proclamation similar to his travel ban in 2017.

An unnamed White House insider told the Washington Post that “The Administration is considering wide range administrative, legal and legislative options to address the Democrat-created crisis of mass illegal immigration. No decisions have been made at this time.” Another quote published by the Post said that “everything is on the table”, indicating that the administration would explore every possible avenue to stop the caravan and deny entry if asylum seekers do make it to the border.

On Thursday night, CNN published a story stating that Defense Secretary James Mattis would authorize deployment of at least 800 troops to the Mexican border to assist with patrols.

President Trump campaigned with a promise to tighten immigration controls. While the politics are often divisive, uncontrolled immigration has the potential to disrupt economic growth and communities close to the border.

Would an immigration ban on asylum seekers be justified? Or, will the White House face another battle in the courts? An official announcement is likely to appear within the next week, with the migrant caravan less than 900 miles from the southern border today.