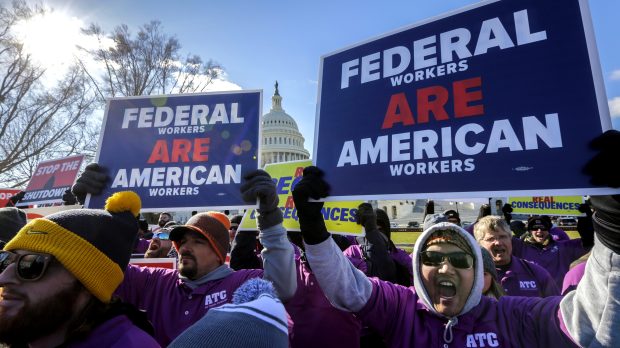 The ongoing partial government shutdown is now the Longest Shutdown in history, with Monday being the 24th day since funding lapsed.

The shutdown centers around President Trump’s demand for around $5.6 billion for border wall funding. Democrats are unwilling to finance the wall through Congress, and Republican Senators are unwilling to pass any new spending bills that the President won’t approve of.

What Are the Options from Here?

President Trump has stated that he is considering declaring a national emergency, which would give him the power to appropriate wall funding from the military budget. However, lawmakers have warned that this wouldn’t guarantee the reopening of the government, as parties would still be at odds on several partisan issues.

Lawmakers have at least reached an agreement on a proposal that ensures backpay for furloughed workers, however, funds will not be made available until the shutdown ends. This could leave 800,000 employees in deep financial strife. Federal workers have staged protests in Washington, imploring the government to reopen.

the Longest Shutdown with Huge Social and Economic Impact

News reports indicate that federal employees have missed mortgage and credit card payments, and that some have filed for unemployment benefits.

Federal contractors are also impacted and are not counted in the 800,000 directly-employed federal staff. Ancillary companies have also felt pain, such as restaurants and other businesses that operate near federal offices.

Farmers and other businesses are unable to file for federal loans. FHA housing loans will likely be delayed due to partial government closure.

The aviation industry has been severely impacted. Lengthy airport delays are being caused as the TSA runs on skeleton staff, all of whom are working without pay. The FAA is also operating at reduced capacity with unpaid workers on duty. This increases stress on air traffic controllers, limits aviation inspections, and delays aircraft permits.

President Trump said in December that he would be “proud” to shutdown the government, a statement that he may regret. Republicans have blamed Democrats for the shutdown, due to their refusal to fund a border wall.

A CNN poll found similar results, with 55 percent attributing the shutdown to Republicans, and 32 percent believing the Democrats were most at fault.

President Trump has warned that the shutdown could continue for months. 25% of the federal government is closed today. Congress will be in session this week, and any progress would be good news for the nation and the federal employees who are directly impacted by the situation.