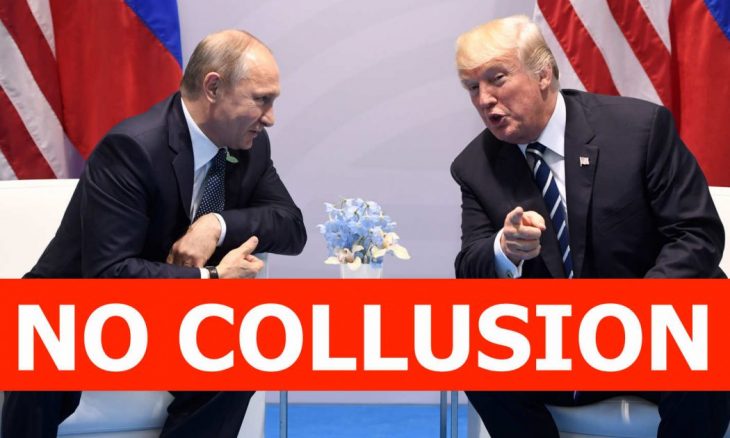 Almost since the beginning of his Presidency, Donald Trump has been plagued by accusations that his campaign and he himself had colluded with Russian operatives to win the 2016 election.

A Department of Justice Special Counsel Investigation has been ongoing since May 2017, with the task of:

Known to the public as the Mueller investigation, it has remained in the headlines for months. High profile Trump allies and campaign officials have been prosecuted for issues unrelated to collusion, however, the investigation has now drawn to a close. Most importantly, there’s good news for the administration and the President’s voting base.

According to a four-page summary report released on Sunday by Attorney General William Barr, there is no evidence to show that any Russian-Trump conspiracy existed. Special Counsel Robert Mueller wrote in his findings that “The investigation did not establish that members of the Trump Campaign conspired or coordinated with the Russian government in its election interference activities.”

President Trump, who has constantly been dogged by questions of Russian collusion sent a simple tweet out on Sunday. He told his followers; “No Collusion, No Obstruction, Complete and Total EXONERATION. KEEP AMERICA GREAT!”

Full Details of Report Likely to Be Kept Secret

House and Senate Democrats will undoubtedly be interested in learning more about the full report, particularly if it includes politically relevant information. However, many details of the report are likely to remain secret and will not be released to the public.

Barr said in a letter to Congress that “Based on my discussions with the Special Counsel and my initial review, it is apparent that the report contains material that is or could be subject to grand jury secrecy requirements.” He told lawmakers that some of the information “by law cannot be made public.”

Some Democrats have outright called for access to the full report. New York House Representative Jerrold Nadler has said that Trump was “wrong” to claim exoneration and that “The only institution that can hold a President accountable is Congress, and Congress therefore needs the evidence and the information.” Nadler added that it is “equivalent to a cover-up” for the Justice Department to withhold the complete report.

Nadler indicated that the House Judiciary Committee will ask Barr to appear in Congress to answer questions about the report.

Investigation May Generate More Than It Cost

For many observers, this will be the only real positive to come out of what the President himself has often labeled a political “witch hunt”.