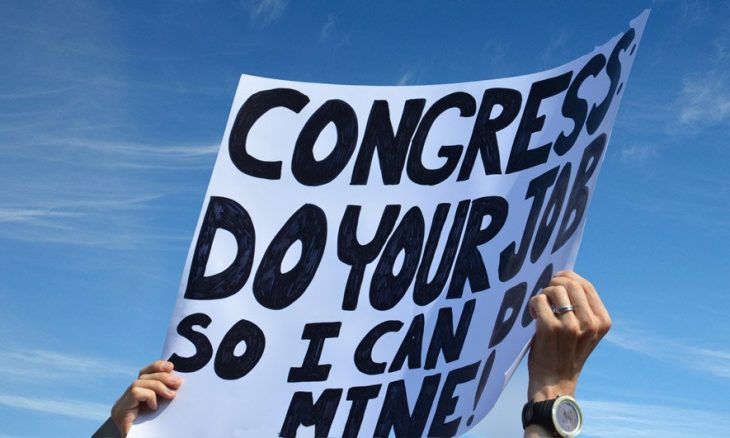 The ongoing partial government shutdown now the second longest in U.S. history. 25% of the government remained without funding on Sunday, marking the 16th day since Congress failed to pass a new spending bill in December. Only the 1995/96 shutdown was longer, lasting 21 days under the Clinton administration.

The government remains deadlocked with Democratic lawmakers unwilling to provide $5.6 billion in border wall funding. Without a new bill, departments like Treasury, Homeland Security, and National Parks will remain operational with only skeleton staff who are working without pay. Up to 420,000 staff have been furloughed during the shutdown.

Talks Ongoing but Unproductive So Far

The President met with lawmakers on Wednesday and Friday last week, presenting his case for border wall funding. While Trump said that talks were “productive”, House Speaker Nancy Pelosi said that the meetings were “contentious”.

The House of Representatives is now controlled by a Democratic voting majority. The Senate remains in control of Republican lawmakers. The divide means that any spending bill needs to be accepted by both sides of Congress, and the President still holds a veto. Senate Majority Leader Mitch McConnell has stated that his party will be unwilling to vote on anything that would not be accepted by President Trump. McConnell called the current Democrat offer a “total nonstarter”.

Democrats have proposed that stopgap funding is provided without any wall funding, which would cover government departments until at least February. Senate Minority Leader Chuck Schumer said last week that he asked the President for “one good reason why you should continue your shutdown.” Schumer said that Trump “could not give a good answer.”

The answer, of course, is that President Trump is pushing for tighter security and the funding to erect a wall or steel barrier along the southern U.S. border. This would curb the flow of illegal migrants from Mexico and Central America.

The President still has another option even if he is unable to gain funding from lawmakers. Trump’s executive power would allow him to declare a national emergency, which would presumably allow him to use military resources to fund and build a wall or other effective barrier. In an interview on Friday, the President said that “Absolutely, we could call a national emergency because of the security of our country. I haven’t done it. I may do it.”

With a lengthy shutdown causing rumbles in the stock market and interruption to key government services, executive action may be the only feasible way to break the deadlock and get the government moving again.